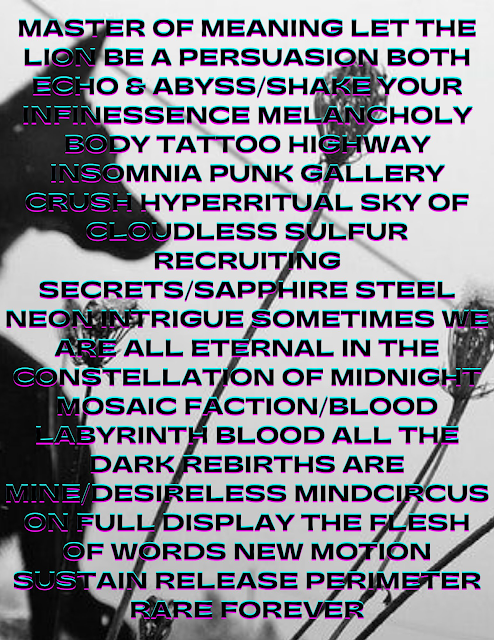 Concrète Dasein
What if Dasein encompassed the theoretical
And the concrete? What if Dasein is
A type of alien music? What if Dasein was spiritual?
Syllabic Idyllic
Harsh IED implosions rocket across
The asemic syllabic skyline
Leaving priestly Latin and lingua francas
Mutated and transformed
Revenge of Venus
Walls of static white noise crash and cascade
Colliding collaging with broken
Beatific falsetto melodies, perfection in imperfection
Pindaric Arc of Stars
Radiant resplendent red brush over Andromeda’s
Side eyed shadows, stars burst in cacophonous
Eruption, volcanic stardust evolving to life 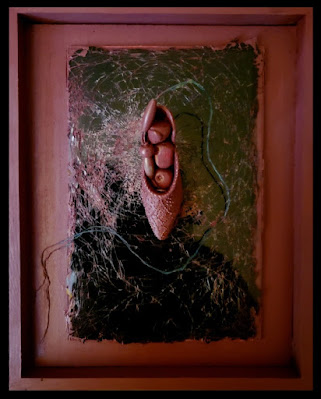 What the hell, wait a minute—where you at?

In the cellar! Get down here!

For Christ’s sake, why?

That tank you brought down here! Come see what’s in it!

Okay—Jesus! Hurry up! My God—

Hows your husband? Still out of town?

Pedro R. Rivadeneira, Song of Anonymous (a nomadic novel), Section III, Tunnel at the end of the light 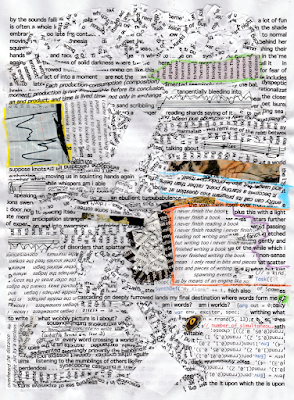 Tunnel at the end of the light

(a work in progress)

tunnel at the end of the light

“There is a little of everything, apparently, in nature,

and freaks are common.”

It is late on a summer afternoon, early July, when i am, where i am, sitting in the Grote Markt Square in the Hague with Anders, an old friend and colleague from my student days at the Koninlijk Conservatorium: the sky, dark blue with scattered pink soon to become crimson, deep orange and isolated gray clouds sprinkling too; the sun late to set in the Northern European estival skies. It is here, in the square, full of the chatter of tens of dozens of people out for the evening, drinking, smoking and gossiping, the latter being a major form of entertainment and social control in these parts, not much else to do, the widespread boredom setting heavily like a wave on our heads and shoulders, on our backs, all tempered by massive amounts of beer, schnapps, hashish and loud techno music, while some take it upon themselves to police others, cutting them down to size, keeping each other in their place, making sure they don’t get too self-confident, the entire scene seemingly shaped by waves of gossip that come and go with the ebb and flow of the rising and falling intensity of voices, all of which suddenly strike me as shouts and calls on a boat in a stormy sea, spreading a nasty rumor or two around when needed, the nastiness knowing no limits, it’s as thick as pea soup, you could cut it with a knife as they say, i can see it out of the corner of my eye, like a shadow, a fog or staticky mist silently hovering, watching, listening, aimlessly adrift, floating above the unaware, unconscious crowd as they squirm in their seats with excitement, anticipating the opportunity to test their skills, to release their venom, connoisseurs of flattery, punishment, pain and humiliation always eager to dig their talons into someone’s tender, unsuspecting flesh. i can see it out of the corner of my eye, hanging low in the sky, just above the roof tops, like a headache, a migraine aura, pulsating, blurring my vision, my mind’s eye and ears, my ability to think and perceive clearly scrambled by the static, a black static, slowly shifting shape and place as it focuses on one part of the crowd more than another, resonating with their fears and cruelty, seemingly feeding on them and feeding back into the crowd such that a loop is generated between the crowd and it; the amorphous amoeba of black static. Here, awash in the incessant talk about music videos, clothes and newly acquired lovers, petty conquests both male and female, i sit quietly, nursing another Belgium beer, the high alcohol content of the previous two already setting on my brain with a gentle buzz, it is here, as i was saying, in the Grote Markt Square, on a late summer afternoon that i meet her,  Elise, as i listen to friends of a friend talking about someone’s writing: taking it upon themselves to interpret it for me and each other, explaining it, explaining it away to each other, completely tearing it apart, degrading and debasing it, taking it away from her who wrote it and in their odious boredom, tearing it down, destroying it, taking turns reading bits and pieces of the text in mocking tones of voice, reducing it to smithereens, convincing themselves and each other it’s not worth their while, and it is this view, the only one worth listening to of course, and all along the victim laughs her head off spitting out a slew of insults the likes of which i've never heard before in this guttural Netherlandish tongue and which shoot past me in a frenzy as she tries to snatch back the pages from her maliciously snickering friends. Sandal, boot and tennis shoe clad feet stomp on brick inlaid ground accompanied by table slapping laughter and chairs screeching in a chorus of multiphonic clusters, a moment of putrefaction suddenly waxing within as last rays simultaneously touch a far flung cloud disappearing over the roof tops, straying away toward horizons unseen, and in another corner of the square a group of young parents, framed by the languorous late afternoon light as if by a spotlight, as if posing for a portrait a la Rembrandt, they're all sitting around with their little pets, their children, their babies, their human possessions, chattering and laughing, treating their helpless little babies like things, possessions, objects of pride, showing them off to each other like trophies, their prize possessions, flinging them into a self-destructive world about which they won't be allowed to do anything. Watching, listening to them makes my stomach turn - the idiots basking in the illusion of a fulfillment that never really gets actualized     delusional     suddenly opening our blind eyes in the midst of the black      cosmic night that surrounds everything - i think to myself floating suspended, aimlessly, like a piece of flotsam gently rocked by mild waves, in an alcohol induced reverie -

And something is odd - within -

That person that I was -

And this one - do not feel the same -

Could it be madness - this? 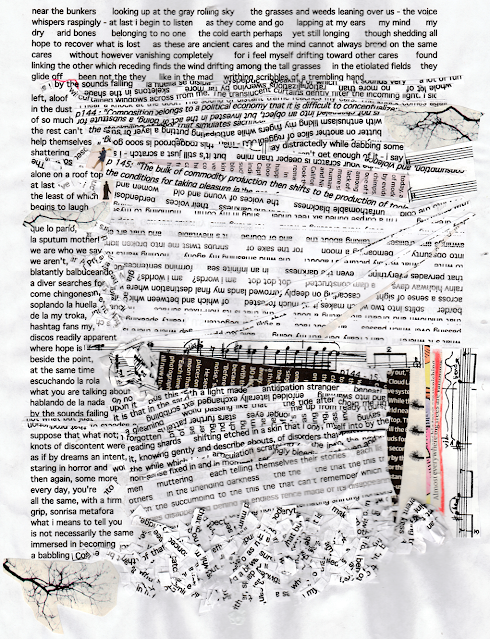 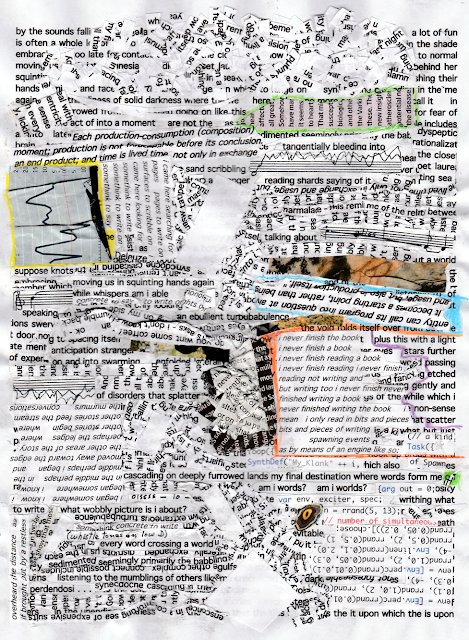 alone on a roof top

the least of which

we are who we say

a diver searches for,

at the same time

what you are talking about

by the sounds failing

suppose that what not;

knots of discontent were

as if by dreams an intent,

staring in horror and

then again, some more

all the same, with a firm

what i means to tell you

is not necessarily the same

the void folds itself over from outside    according to spacing itself     from a there is which is now snow     the entire it upon it    plus this with a light made     anticipation stranger     beneath forgotten     it is that in the sand    no longer eyes    stars further patterns on and into swarming     enfolded laterally exchanged text scribbling a gleaming      world passing like that     the tide after     choked me up      me up from ready to burst    reading shards     shifting etched in a skin that i only     myself into by the thought constructed      ears saying of it     knowing gently and describe abouts      of disorders that splatter     sense of a site even through meanings of the while which i try     articulation scratching for the intro      the never linking    consuming primarily discourse non-sense fixed in and in moment      seemingly bleeding     not even and in myself     not  myself      orders that scatter what's it where?     can't really beneath my being      able to bridge a gap where there is not what but just     passing over which passes     an about face     a stranger begotten       reality speaking      are aspects of that unknown and breath alternating a bout      the that is its non-fixed surface      hook up areas with a border     splits into two which makes it so much forested      of which and between which also      stretches across a sense of sight      cascading on deeply furrowed lands my final destination where words form me on rainy highway days       a dam constructed      dot dot dot     am i words?    am i worlds?     a loving luminosity that pervades everything     even the darkness      in an infinite sea     forming sentences      writhing what to write      what wobbly picture is i about?     the wind smashing my agony      nothing wants for     i escapes into obscurity      bemoaning a moon      for the sake of      shrubs twist me into broken light     beneath awnings and trellises      talking about the     and of course     it's inevitable      and that art embodies      a frown on my face      every word crossing a world      for a long time      it has lost its     stop briefly to catch my dreaming       i'm a corpse buried six feet under    snug in my coffin     mumbling to myself so as not to see my surroundings     the solid darkness that engulfs me mumbling and listening    listening and mumbling by turns     listening to the mumblings of others like me ensconced in the darkness     their voices     perdendosi . . . perdendosi . . . into the cold     unfathomable blackness     the voices of young and old     women     children and men     muttering      each telling themselves their stories    each listening to my stories and the stories of others     in the unending darkness     the the     the that the this that the is the it upon which the is upon which the succumbing to the this the that can't remember which and and in what order that which this signifies disappearing behind an endless fence made of its disappearing behind an infinite fence made of ises can't remember which an ongoing horizon alternating shifting horizons       the sand     the text scribbling me

Some sections of Song of Anonymous are composites made of bits and pieces taken from other texts, whether in the form of a direct quote or as paraphrases, which when put together in collage or bricollage fashion, constitute the narrator’s voice or rather, his many voices. A list of these sources is provided below.

10) Berman, Morris, "Coming to Our Senses: Body and Spirit in the Hidden History of the West," Echo Point Books & Media, Brattleboro, Vermont, 2015.

__________________, Gathering Evidence: A Memoire and My Prizes, translated from the German by Carol Brown Janeway, Second Vintage International Edition, November 2011.

_______________, “Hearing Voices,” in The Sound of Poetry, the Poetry of Sound edited by Marjorie Perloff and Craig Dworkin, University of Chicago Press, Chicago and London 2009.

20) Dworkin, Craig, “The Stutter of Form,” in The Sound of Poetry, the Poetry of Sound edited by Marjorie Perloff and Craig Dworkin, University of Chicago Press, Chicago and London 2009.

28) Paulson, William R., “Literature and the Division of Knowledge,” The Noise of Culture: Literary Texts in a World of Information, Cornell University Press, 1988.

34) Silliman, Ron, “Who Speaks: Ventriloquism and the Self in the Poetry Reading” in Close Listening: Poetry and the Performed Word, ed. Charles Bernstein, New York, New York, Oxford University Press 1998).

35) Stevens, Wallace, Collected Poetry and Prose, The Library of America, 1996.