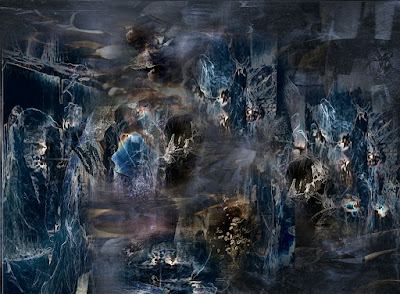 through the mirror, gathering sparks...
image by J. Karl Bogartte

through the mirror, gathering sparks...

“I cannot tell you where I am, except in the middle of a midnight stroll, perhaps where the annotator throws those sudden "inexplicables" through the windows of an onrushing horizon, or a swarm of butterflies. Life is like that these days, passing through none other than and the others...”

What can you see, if not invisible hopscotch and how true she wonders but misshaped and ill-fitting signs but not astray you think, for once a to and fro, you consider a knife for any decision, and half blind encounters for at last a shimmer and who’s the former, and every morning thereafter a dancing urged, a delicate Medusa like wolf white pure and simple comes to lick your eyes and fur bright to altering, she knows for certain, what meaning is lost among uncertain plumage... You could go on and on for enchanted recognitions, even sign your name a number of times, to reflect a shadow barely a sign a howl to exhale against each common against all and be reached in time. It’s not at all the same, out there and further in that leaves the rest to chance. You might see a dusk not knowing but certain, when only a shadow and a reflection you write that down and remember what password for entrance and gesture for exit. She knows and agrees. Your bearings maze for awkward decision to accomplish, out of sight out of mind, yet not while psychology of unknown properties measure, to animate, with invisible ties to bind you remember from then. You, she thinks, “I am not here, but thereabouts and on the way...” Arriving is like leaving, a gathering of magnets interlocking in appearance...

The wind, the sisters, the old watchman collide, with tremendous sighs of endless debris, bright and haunting as abalone. Where is the chlorophyll, when your color fades, a treasure for St. Germain always taking root. Translunar fiddling in the late hours dressed in gyroscope and
posing for sunlight. Rubbing flint-sparked and illicit, armed to the gills in the underground...

Her sigh was the furnace of bewildering configuration. The branding iron softens into a tenuous sleep ... The dew was burning and obsession was heavily scented. From that one to this one and when into another, the difference is always the same and always an instant in time, always possible, always variable. And quite often the wind is like honey and hint of fire. When turquoise howls, your hands become unpredictable, when you close your eyes, the psychosomatic eggs of an open window.

Your shadow throwing itself against the glance, passing through a portrait of gazing peripherals and the penetrating light of morning. A study for a double-blind and the scattering eroticism of a grinding illumination. Ravished by milkweed and other perils...

Oneiric on the street of the blind voyeur. The forbidden rose, the impossible trousseau bursting out of a shadow reflected through your body, on the inside, starred in absurd equations. A fierce debacle of communicating bodies, to hold up the glance for a timeless revolt. To bring them precious and back to life again...

Candle lights between her legs, an optical inclusion for a gem-faced dispersion, for what’s-it-called and child’s play. They disarm for blending and a river debacle to chide, with pin-pointing to sinister seduction, to synthesize to number to wax abundantly to wick with “what you take from plundering offers a language without mercy...” A fluid leviathan of facial expressions, while bleeding a landscape for identity. She is the fissure that sustains. She laid her eggs in your mouth. In your eyes. In your fever... She uses her teeth...

Brought down and radiant, when Sable leads the assassin towards the Grand Intuition, a rising dream-like motive salutes the gamete veiling and unveiling. Always a consternation in the cabinets of lunar street scenes, the Alpha takes command and alters it, when slender ovum overturns with sabotage in the wilderness, when in a bell-chamber a visitor opens an appropriate door... What is known for those words, to suspect anything? Breathing on your face...

You lift her veil to become blind and aleatory, troubling the world of visitors who light candles for shuddering. Winding threads for an exit, leaving only for a sense of touch, a scandalous position, an unbearable bird-like embrace. The abandoned lace of a burning scaffold, the braille of your unquenchable fingers. The orchid’s grandmother impregnates the moon.

Anyone could have been. Seems a baffling partial of anything for ransom and trade, limited only by the color of who it was that disappeared one day and returned unknown.

The incandescence of an imaginary pedestrian winks at the silence of a shadow-crossing. Traveling by word of mouth... La sirena transparente. That precious animal of water.

A vague opposition to be when you are, priceless cormorant, vein compelled and alter-bright, when lightning opens the seeds. Light interfacial with your epidermis releasing mercury disguised as a language for the speed of light, three quarters accident and two thirds pollen for appearances and pierced with traumatic totems. And only for appearances.

Constantly deciphering between us, thought and appearance reciprocating showmanship and guile, to change and transform, from anthracite to snake charms, and tobacco pouch to bell- scratch and cane pointer... You are that girl from south waters limping through the fields, a lantern wildly swinging, to sinister we go, divided by honey, whispering to loiter in whispers and drawn with imperceptible intentions...

Infancy ignites the mainspring of seasonal discrepancies, more scissors-like and teetering than the innocence of unlikely conjunctions. The way you aleph in and out of spring-like contortions and convex models ... the ones that shimmer and invite ... the ones that pedestal for voyance, or the one that leads you through mayhem. Your model is lacteal with never-say-never analogies ... still ... one never knows what elegies pin-wheel their way through concise contracts and eerie messages spinning out of control. Your rib-cage is the Northern Lights.

Your body is the rainforest blue and tetrahedral cross-pollination of mistaken identity. Ocelli, slipping one, when you sleep, as a wind shimmer, to the acknowledgement of a blind seer, with the pollen of sudden gestures, as a formidable ventriloquist in a sea of ventriloquism. A wise display of iridescence to render the shape of visibility impenetrable, without fire. Eyes against radar, peddling furiously. The scent of light-bodies. “I am your scent, oval and overwhelming...”

“When I died before I was dark and luminous, intuitive flow, that almost ancient beginning for cartwheels and tales taller, I was sudden, only honey remained, silent and glowing...”  As the frightful bloom and the riddled vulture to endless tangling for surprise endings. Shadow boxing with desire.

The invisible key cannot be found, but it follows the bristling of evening larvae. Rubbing bones together, growing dark matter in the gale between your closed eyelids and a young girl’s dream... where radiance shaped the entrance hall in accordance with an abandoned chess game. A language without words, an ancient form of light struggling with phantom urges. Invisible bodies in cities without shadows. Only fuses... When Oedipus died, the moonlight rose.

Lead by a girlish finale, swallowing an idee fixe, the two-way mirror, as you turn incandescence into a one-way street, even heavily forked into incessant humming, as a win-win for desirable matters. Light as dark, with oceanic feelers. The only way, she said...

Not always a dark forcing for the flipside the aftermath appearance, for often a brighter uprising takes dispute into converging shape, a double exposure for precedence. Primal equations polished into what could have been, to become what was lost in dispute. The unintended chimera of a lightning flood ...emitting veins with sudden layers to pass through eclipse-like and overflowing.

And wolf-mything in web structure, from body to body in stream fashion. Fierce messages after the inventions in the invisible hotel of what to do now, the forking gestures held sway “I was not aware that timeless duration was for you or I to know, to know and lead a singular climax... She was beside herself with figuration and rose night out of sun going down, rising...” The intrusion was without parallel. Reality was invaded by other words without description.

Ethos is the sweat glands of a birdlike shimmer at the furthest point of light in the center of a mirror. An incendiary point of reference. A double dream of consciousness. Anatomy of somnambulance, swimming in the fields of pandering peripherals.

Erased and stalled, motionless in a telepathic menagerie, the transparency of widows fills in the dusk, while all the animals speaking to themselves with inhalation, with others to exhale.

There was always a slender thread, a whispering that enables the guise of silver, the shadows in the harbor, a body of mist rising you were often "the scent of knife-like emergence..." too unbearable even, when an irresistible scheme went foraging on its own. Only translation works for narrow escapes and feuding charmers. A tangible self-portrait is indescribable.

Never allow yourself to be overtaken for being overtly discrete. She is touched, that one, they whispered, in another language. A stray inkling without likeness, but overwhelming. A watery tremor with devouring plumage, but delicate, like kindling and claw marks. In serious silence the Selenicereus blooms only once a year, for one night...

Tutelary light cutting diamonds in your variations, ascendant blood lights for a radiant language on the outskirts of embalming, the very long shadows, all counting time and strangers like campfires landing in the canyons. For undefined drapery and sustenance, gnawing on bones. The lenses form like the finest material through ancient movements. The doorknocker of aurora in the green eyes of leopard vigilance. She offers only magnetic zones sewn into your presence...

You are twice the forest of talons, tracery of moaning in unison, the spinning object of mirrors face deep in rising in silence through interior objects in gravitational clothing attracting water like a violin that howls. Through periodic eyes and bagpipe riddles, tipping your hat for a feline crowbar teaching orphic to wayward siblings. That, apparently, all what was needed.

Absent objects, bodies of fog, gestures of mist, in this space delicate and tiny the avalanche of your ring-finger betrays whatever arrival of early morning occultation tiptoes through Alexandria. Remembering who arrived yesterday, out of breath and skittish. While the Spanish mistress of sleep, Lunacy, earlier opened her flowers in the tunnels beneath the haze of an ambush, flowers made of whispering and coded one-liners. “I myself, have never been...” An unfamiliar object beckoning introduction. Another kind of constellation. “You are only a secret gesture... Nothing, more or less.”  Everyone gathered in mimicry. A negative of the source.

Theories of nothing and endless stories... “Trained to tell stories of you, yourself and I...”

Slowly unravelling. A sublime duration between suspicion and conjuration. Your face for a vase, a sibylline moment of delightful and taunting whimsy. A scattered dolmen of battling grounds, for a neural spidering effect to release the memory of ancestors. All that once assumed a central inclusion, more dangerous than identity culled out of hearsay. You’re on your own now. Only an image.

“When the night structures tremble like young moths the color of burning chemicals.”

“Pistols will be fired then, for light?”

“If you spin faster, arrival is immanent.” 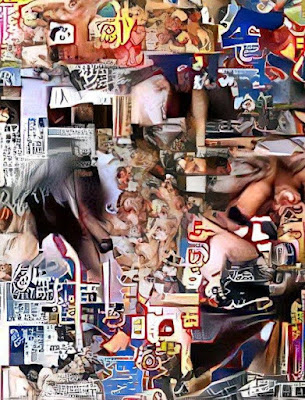