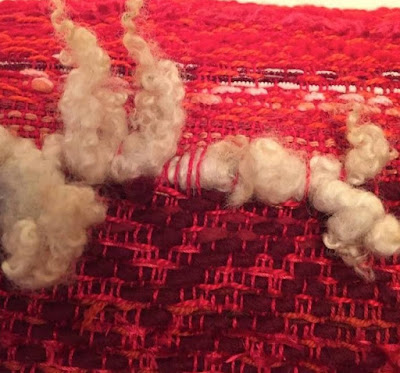 from INTERTEXTILE: TEXT IN EXILE:
Shmata Mash-Up
A Jewette for Two Voices

the dissimulation of the woven texture
can…take centuries to undo its web.
Jacques Derrida

All yarned about and yearned for –
from flax to linen, paper to book, to black ash to sparks of light
lines, lineaments spun animates, laminates of
delineated limned innards of filament rinses
we enter deep inside
inside the body of the words
rummage inside its textual guts: haruspex

And in re-examining: sheep organ as oracle
Organum organic oracle gauzy orgasmic grassy origami
we fold words, letters, text, bodies
reminded of how inside the mirage is the RAG
inside the haruspex, the spectre,
of semes, memes, seems, seams, screens, screams,

mis-en-abyme
endless ribboning
and shmata shows us how the text becomes an infinite field of organic symbology anchored in history and innovation
tradition and traduitioni. Drenched in not Rabbinic law, but ribbonic law
for it is said, “the ribboni is mistress of herself
She has no master in her world
But instead re-wraps the fabric of many generations,
processing them into treasures of liberated expression.”ii
Culturally re-locating and inter-locuting
all strung out and threadbare

(or wrapped around your little finger)

Chew on this thread -- A popular Yiddish bubbe meise (old wives’ tale) is that it is customary to chew on a piece of thread whenever one is wearing a garment upon which someone is actively sewing; such as attaching a button or repairing a seam. For it may lead to the sewing up of one’s brains (“mir zollen nit farnayen der saychel”). Another Yiddish explanation for chewing on a thread is that burial shrouds are sewn around the remains of the deceased. Actively chewing while another is sewing on one’s garments is a clear indication that one is quite alive and not yet ready to be buried.

Or as in buried meaning when
inside the shmata is hidden in the sham the alternative facts
rethreaded histories, mysteries
when you seem to be pullin’ the wool over my [  ]

in a rag-bag of embroidered positions,
banned. unbound

like "the dark studded space with stars –with so fine a needle that ... the sky must be full of wailing-women who at each stitch gave out a fiery scream" [Jabès]

or how for H.D. each word comprised “so many stitches and just so many rows”
in the eros of what’s shared between the
shearing and the sheer, cherched shaar, shir ha shirim; 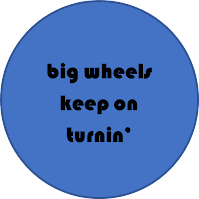 (The Kabbalistic 2nd C. Book of Formation), the 231 wheels that reference all the letters and all their combinations and permutations, all the gematriatic associations, the blueprint of the creation of the universe and the alchemical draft to create a golem

According to Rabbi Eliezar Rokeach in the Book of Formation, to make a Golem, one must assemble the 22 letters of the Hebrew alphabet and permute them with the Tetragrammaton, and all the vowels, in the array of the 221 gates of meaning. Each sequence contains 442 letters, so to complete all 22 letters of the alphabet, one must use 4862 letters. Each of these letters must be pronounced with every possible combination of the 5 primary vowels and the 4 letters of the Tetragrammaton, a total of 9724 pronunciations for each lettered pair. This means the entire exercise makes use of 486,200 pronunciations. Estimating 4 syllables a second: 11⁄2 hours per sequence resulting in 35 hours to complete the uninterrupted process.

And in your mouth is placed a parchment of
letters

Drafting/drawing out the secret codes
Plying/folding/twisting. Pulling through our pilpul / play

Pilled, plied and parlayed, pilpul: the methodology of Talmudic study.
Derived from the verb "pilpel" ("to spice," "to season," and "to dispute violently" or "cleverly" [Shab. 31a; B. M. 85b]). Since by such disputation the subject is in a way spiced and seasoned, the word has come to mean penetrating investigation, disputation, a sophistic method of drawing conclusions.iv
Pulling meaning as lips slip pull splayed through spliced poly-puns

knotting and reknotting ­– Not (negative dialectics,
via negativa, negative space,
dissent, object/ion),
but the knots of the words, of woven gilded letters

and the Not[ch] of the drop spindle:

drop
spin. pin.
pliant pries
And commensurate with how Kabbalistically read, the word on high mirrors the world below; whirling through levels, layers, meaning and being, the shmata as an intersective nexus, (all hyper-syntactic and paratactic), an intersubjective and polyreferential signifier the spinning whir of worlds within worlds, whorls within whorls
in a whorl up se[a]

or a sea of sh[m]atnez

Shatnez is cloth containing both wool and linen (linsey-woolsey)v which Jewish law, (derived from both Leviticus 19:19 and Deuteronomy 22:5, 22:9-11), prohibits wearing.

It is forbidden to wear wool and linen fabrics in one garment, as it highlights the interbreeding of different species of animals, and the planting together of different kinds of seeds.vi

Interestingly, throughout midrashic and Kabbalistic hermeneutics,
particularly, in Zoharic interpretations, the lamb is indicative of Yoshkevii –
so, perhaps the prohibition of mixing wool and linen,
could be folded into the historically polemical encounter between Jews and Christians

and the fiercely deep-seated prohibition between the commingling of cultures

However, the priest's girdle and the tzitzit are preferably made from Shatnez –so one could also read the prohibition as a way of setting aside this fiber blend
only for holy purposes.
Some say strictly no mixing –no wool and linen threads together
no mollusk dyestuffs (murex)
Some say no strict mixing
Some say stringent division
Some say gemishte for the win!
Some say crochet sashay parlay this into that

According to the Mishnah, the word Shatnez
is an acronym of:

According to the Mishnah, the word Shatnez
is an acronym of:

Thus, in the very mixing of mixing, combing, spinning and twisting, the text and textile merge, in a confluence of sign and referent, word and thing, through extensions of extensions, interpretive modalities which embrace conflict and paradox

and all is re-mixed through the linsey-woolsey warp weft of all that is sacred, secular, holy and profane; blanketed in your holy knots, frayed and worn

ordinances, spun-struck strands.
***
So, with not a hair out of place, every anomaly erased
the shmata highlights a textured writing  –
all that is down and dirty, gritty and nubby, as streets, walls, rough façades
bumpy and moss-encrusted broken buildings, sidewalks
cracked friezes, rusty and dilapidated
deliciously textured
as Artaud describes the body –

a mad torch, a limp rag of dead sperm
an Ur-text text-ured
an abject fabric tacked on ornate frame
as a martyr stretched on the golden rack
the warp cries against procrustean loom
whereon it’s strung
permeable, raw, soft tissue torn and sewn
the weft transgresses open wounds
only to close them
the bleeding shmata a theatre of cruelty
another turn
another turn
another yearning turn of the front beam
roiling the senses

For texture as ur-text gets your hands dirty, says dig your fingers in. Nap and patina, oxidized powders, copper excrescence (green from copper, rust from iron), velvet from satin, slubs from skeins, shine from silk, roughed-up, abraded fingers leaving spiky threadlets standing up in delight.
And so it is, the shmata exposes a textured writing, one that is adorned, self-conscious and self-aware, mannerist, exaggerated, a ravel of complexity: a “poetic” writing that foregrounds itsform. And yet is humble and almost furtive, out-of-the-way like Jean Genet, whispered from the cracks in prison walls and warming up the human misery inside, reveling in its eccentricity.

For texture is that which resists: graininess, frictional pleasure, creating meaning in its micro-challenges (the whorls and eddies of the fingerprint, nap of velvet). Texture as dirt/patina, the hermeneutic anomaly, the raised weal of flogged skin, the damask rose on the featherbed cover. Texture is to touch as timbre is to sound: its connective and collective tissue-event

And as a haptic auditor
the shmata, is listening, glistening
hears you –
through acoustically crocheted curved space;
spiraling spherical, re-subjectifying
text, texture, weaving the between

the shmata riffs through shifting drifts; riffraff on the riprap, hiphop on the fly says it’s in the layering, the sampling, the folding, the labializing and origamizing of the surface. Upthrustings and seismic distressings of discursive topographies, spirings, abyssings and swirlings of sumptuous difference, glaring and subtle

reminding us that smoothness is also a texture:
i.e. glatt kosher (the lungs of the slaughtered animal are smooth,


glatt: not diseased), more kosher than kosher / of stringent standards

glatt. glut. glas. gliss. gloss. a glossopoeisis
of textured glossolalia
the shmata asks us to think about texture as roughed-up disciplinarity,
“scarified inter-disciplinarity.” Rather than the smooth interdisciplinarity of, say, historicism or the “art and literature of…” model that predates it, the shmata’s is an interdisciplinarity that tries and plies and mats itself into the apertures and closures of thinking, inviting and opening itself to troubled spaces; for in the between is where the ghostly fingers play against the curtains.
And reminds us that we need not think about smoothness as facile or glib;
complexity and difficulty are not the only indices of worth.
The simplicity of a Zen koan is in direct proportion to its opaque enigma,
a stone worn smooth by millennia of oceanic friction.

For as it is said,
"the ocean is woven"